I read this in the star last week (Friday, 29 April 2013) and I think I should share this here in Melaka Cool. The article depicts the racial harmony that we have in Malaysia. How we can live together despite the differences of race and religion. I just hope that the coming general election will not change this.


If a street can knock some sense into politicians bent on using race and religion to divide the people, this is it.

This stretch of road, referred to as ‘Harmony Street’ by the locals, is among the city’s must-see tourist attractions.

Here, ancient places of worship of the top three religions practised in the country are located in close proximity to each other and on the same side too.

The Sri Poyyatha Vinayagar Moorthi Temple, the Kampung Keling Mosque and the Cheng Hoon Teng Temple are grand testaments of religious pluralism practised in Malacca, the cradle of modern Malaysia.

They stand as splendid reminders of the old days when people had mutual acceptance and respect for each other, irrespective of ethnicity or religion.

The Sri Poyyatha Vinayagar Moorthi Temple, which has some elements of Dutch architecture, is the first to be seen if one comes from the direction of Jalan Tukang Besi (Blacksmith Street) and Lorong Hang Jebat junction where the iconic Orangutan House is.

Built in 1781 on a piece of land allocated by the Dutch, it is reputedly the oldest temple of its kind in Malaysia that is still in use.

It is linked to major festivals and remains very much a part of Hindu culture and practice in the city.

The temple is dedicated to Vinayagar, one of the 108 names of Ganesha — the elephant-faced Hindu deity.

Known as the ‘Lord of Obstacles and Remover of Obstacles’, his name is usually invoked at the beginning of all forms of worship and rituals.

As the deity is associated with luck, prosperity, well-being and wisdom, the Sri Poyyatha Vinayagar Moorthi Temple is also popular among locals of other races.

At the corner of Jalan Tukang Emas and Jalan Hang Lekiu stands the quaint Kampung Keling Mosque, built in 1748.

The mosque, built using timber on a square plan rather than the typical rectangular or hexagonal plan, has a curious blend of Eastern and Western features.

It has Corinthian columns, Chinese and Dutch decorative titles, arched windows, a verandah covering the prayer hall and a courtyard with a fountain-like pool for ablutions.

Like other old mosques in the city, its minaret and three-tier green roof look more like they belong on a pagoda than a mosque.

Although areas near the Malacca river in town is now regarded as Chinatown, the area stretching from Lorong Hang Jebat to Jalan Hang Lekiu was where Indians, primarily Tamils and Tamil Muslims lived.

The term keling referred to people from India and was not considered offensive or derogatory as it is deemed now.

It can be traced to the cultural and trading influence of the ancient Kalinga kingdom over the Malay Archipelago.

Kalinga was a powerful military and naval kingdom located in south-eastern India near modern-day Orissa and Andhra Pradesh. It was conquered by emperor Asoka in 262 BC.

Although later traders from India came from the Coromandel coast in south-east Tamil Nadu and from Gujarat in the north, Malays referred to the area as benua keling.

Castanheda, a Portuguese traveller who lived in Malacca between 1528 and 1538 wrote:

“In the northern part of the city live merchants who are known as Quelins (Klings). In this part, the town is much larger than any other. There are in Malacca, many foreign merchants, who I said before, live among themselves. They are Moors (Muslims) and pagans….. “

The third house of worship along Harmony Street is what the baba and nyonya call ‘Kebun Datok’ (Garden of the Gods) and Kwan Yin Teng (Goddess of Mercy Temple). 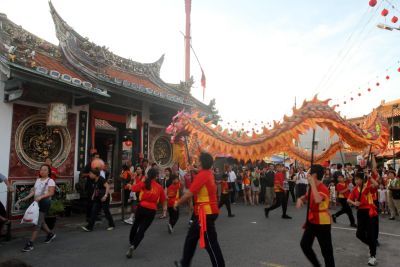 Its architecture and intricate details showcase the skills of migrant builders and craftsmen from China’s Fujian and Guandong provinces.

The huge temple complex conforms the principles of feng shui, based on managing harmony with nature. Based on what has been written on granite tablets, the temple was laid out to ensure a view of the river and the high ground on either side.

The temple’s central altar is dedicated to Kuan Yin and to her left is Ma Choo or Ma Choe Poh deity, the patron deity of fishermen, sailors and sea travellers.

There are also altars dedicated to the goddess of birth, Kuan Kong (a Chinese general deified during the Sui Dynasty) and the gold-faced Pau Sen Ta Tek, the God of Welding.

In the early days, in addition to being a religious institution, Cheng Hoon Teng also served as the official administrative centre and court of justice of the Kapitans.

In 1824, the British abolished the Kapitan system and the leader of the temple, now known as “Teng Choo”, assumed some of the Kapitan’s responsibilities.

Later, a Board of Trustees was formed and the pioneers included Tun Sir Tan Cheng Lock, who also initiated the temple’s unique incorporation under an Act of Parliament.

The Cheng Hoon Teng Temple Incorporation Ordinance 1949, passed in Parliament in September 1949, effectively guaranteed the temple’s future and its role as guardian of the community’s spiritual and cultural heritage.