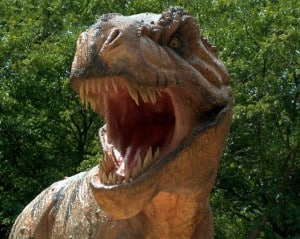 The Jurassic Park is proposed to be built at the 1Malaysia beachfront. Once completed, it will be the first of its kind in Malaysia and also Asia. It’s good that the state government is promoting tourism, the park will add more tourist attraction to the state. However, we at MelakaCool.com are concern on the traffic problem in the historical city. It is bad on weekends and it gets worse during school holiday. We hope that the tram project will help to clear part of the problem.

Anyway, the Jurassic Park will be all about dinosaurs. It would showcase about 200 species of dinosaurs which would be operated through electronic and hydraulic systems. The dinosaurs would roar when you walk past them.

He said the park, the first tour of its kind in Asia, which would showcase 200 species of dinosaurs through hydraulic and electronic methods, was expected to draw over one million tourists a year.

The Jurassic Park, which will be built on a 12.1 ha site by Yayasan Melaka and Eden Incorporation Berhad, will two years to be completed after the signing of the Memorandum of Understanding in March, he told reporters after attending a briefing on the projects at Seri Negeri here today.

Mohd Ali said a 60.7 ha site next to the Jurassic Park at the 1Malaysia Square had also been earmarked for the construction of the Melaka Sea World which would have the largest whale aquarium in the country.